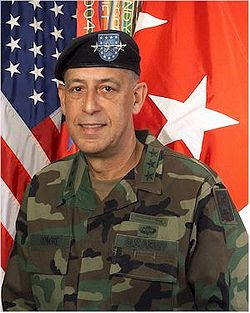 Russell Honore, The Ragin' Cajun. When New Orleans needed a hero Russell Honore, a Louisiana Creole, showed up and started to work. Mayor Ray Nagin, whose word choice often got him in trouble, put it well for a change, when he called Russ "a John Wayne Dude". Louisianians love a larger than life character and Lieutenant General Honore filled the bill just when we needed a hard working larger than life character the most. He captured our imagination and our admiration and it's fitting that during this five year acknowledgement that Russell Honore also be remembered.

George Bush may have visited "Brownie" the poorly regarded director of FEMA, Michael Brown, generally loathed by New Orleanians, onto us, but he more than made up for it with Honore.
Posted by Laura Roach Dragon at 11:24 PM