Brad Pitt Will Be Here Too. 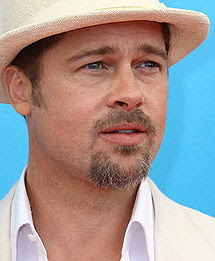 I remember what it was like prior to December of 2006. Recovery was slow. Everything was still such a mess. New Orleans, once a place that people spoke of with excitement, was now spoken of with pity. And for good reason.

Not only that, but the country was sick to death of Katrina and our plight. We were seen as whiners. Bottomless pits of need. Using our disaster to rob the country. "ENOUGH" people were saying. Like any needy relative that the family was happy to help at first, our problems were souring on the rest of the country.

First Brad created the Make It Right Foundation in the Ninth Ward. Atop the graves of homes washed away by the water of Katrina Pink Tents started showing up. Brad Pitt had plans to build 150 homes in the Ninth Ward.  Then he and Angelina moved here. You have no idea how exciting that was. They managed to both re-ignite public sympathy for our plight and also make New Orleans The Place To Be. Pretty amazing, right? They spread pink tents and glitter and used their celebrity for good. Thank you Brangelina. You rocked.

Posted by Laura Roach Dragon at 11:31 AM