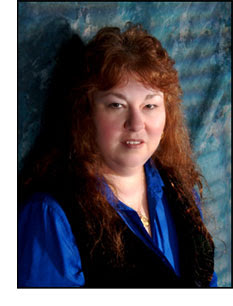 AC Crispin
AC Crispin's blogspot
Writer Beware!!
Preditors and Editors
So many writers yearning to be published. People with something to say. People with stifled creativity and a frustrated sense of wanting to change the world. Sounds like a wonderful caldron of creative energy out there in the world working toward bursting onto the zeitgiest with a blinding flash of brilliance, right?
But it's really, really HARD to get published. And a lot of these folks have money to back up their dreams and aspirations. Sounds like the beginning of a different kind of caldron. A witches brew of fleecing and exploiting and ruining of dreams. Yup, the writing world has attracted a pack of wolves selling the idea of SELF- PUBLISHING. "You are wonderful," they hiss. "You only have to put it out there and you will be appreciated. Maybe even adored." Yummy.
AC Crispin is an oft-published writer in the genre of Science Fiction. She is a dedicated enemy to self-publishing fraudists. She is a hero. The above links should be used to separate the good from the evil.
I am not a fan of self publishing. Not all of them are blood sucking pieces of garbage. Some will do the job they're hired to do with minimum cost and maximum benefit. If you decide to self publish, research, shop, and perhaps, think again.


Self publishing is the softer, easier way. Write as you like and then publish your brilliance. Sounds nice, eh? However, nothing worth doing is worth spending no real time on. Self published works are often mediocre, poorly edited, and badly written. Let's face it, if you were that brilliant, someone would have discovered you at some point.
And if you're self publishing just so you can control the content of your "baby" then think again, er, again. The most brilliant of writers need feedback of some sort. Otherwise self indulgence and ego raises it's ugly head and that's never a good thing.

So gather your courage Grasshopper and SEND IT OUT. Steel yourself to be rejected and rejected and LEARN. The best life lessons are dispensed in this manner. Ow, ouch, yow!! Worth all the heartache if you actually breakthrough. Some people write several books before they make it. I know a woman who wrote seven before her eighth got published. She's rewriting the others to see if they can be deemed worthy. I know of another woman who self published twenty before a "legitimate" publisher discovered her. Many paths to Rome, right.

There is one self published book that hit it big and I mean HUGE. Sugarbusters. A group of New Orleans MDs who decided to re-offer the low carb diet described in Sugar Blues to the New Orleans area. It took over New Orleans with restaurants like Brennans and practically everyone else in town putting Sugarbuster dishes on their menus. Then it went National and a "legitimate" publisher schooled past and snapped it up.

So, yes, every now and then self publishing pays off. Try it if you want. But keep in mind it's a half measure. And half-measures are half as satisfying as full measures. Um, obviously. Put yourself out there, brave the storm. And if you try and try and can't get there, you can always use the half measure in the end. Right? Just be careful who you choose.
Posted by Laura Roach Dragon at 10:30 PM