The Advertiser. Got a mention!!! Merci Chere!

Chere Coen, highlighted at the bottom in blue, wrote an article that mentioned my book Hurricane Boy. Merci Beaucoup Chere! (The best part of the article IMHO is near the bottom highlighted in red.) Flood of Lies looks interesting too. 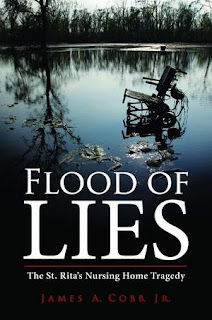 This week marks the eighth anniversary of Hurricane Katrina impacting New Orleans, the Mississippi Gulf Coast and surrounding areas. One of the deadliest storms to hit the U.S. and the country’s costliest storm to date, Katrina was also, for many of us, an experience that would forever mark our lives.

There have been several new books published about Katrina, plus Hurricane Rita that arrived slightly less than a month later, devastating the southwestern coast of Louisiana. One book highlighting the heroes of both storms, ordinary citizens who took matters into their own hands, circumvented official responders and channels and helped hundreds of people is “Second Line Rescue: Improvised Responses to Katrina and Rita,” a collection of stories edited by Barry Jean Ancelet, Marcia Gaudet and Carl Lindahl. Published by the University of Mississippi Press, the book chronicles the creative acts through which Gulf Coast people rescued their neighbors during the chaotic aftermath of the two horrendous storms. The book contains essays, personal narratives, media reports and field studies, and showcases how ingenuity by south Louisiana residents proved successful against great odds. It’s a testament to the power of close-knit communities and individuals who step up and do what needs to be done.


St. Rita’s Nursing Home in St. Bernard Parish and its 35 residents were victims of Katrina’s dangerous storm surge. Once the deaths were in the media spotlight, viewers were horrified and owners Sal and Mabel Mangano were prosecuted.

Defending the Manganos was lawyer James A. Cobb Jr., best known for prosecuting Louisiana Gov. Edwin Edwards for fraud in 1985. His investigation and defense of the couple makes up “Flood of Lies: The St. Rita’s Nursing Home Tragedy,” published by Pelican of New Orleans. Cobb, who teaches at Tulane University Law School and Harvard, insists the couple was misrepresented and sacrificed everything to save the lives of the home’s residents.

Gail Langer Karwoski of Georgia is the award-winning author of 14 books for young readers, including historical books such as “Quake! Disaster in San Francisco 1906.” Her latest book, “When Hurricane Katrina Hit Home,” published by The History Press, follows two children from different neighborhoods in New Orleans who prepare for, experience and suffer through the aftermath of Katrina. After the city is covered in water following the break in the levees, and the two families must fight to survive, the differences in their upbringing and lives fade away. Coming up next spring is “Hurricane Boy” by Laura Roach Dragon, a psychotherapist who worked with children and adolescents separated from their families during Katrina. Her book is a coming-of-age saga in which Ninth Ward middle school student Hollis Williams finds himself responsible for reuniting his family.

Alex McConduit will read from his latest children’s picture book, “Thorn in My Horn,” about a young musician in New Orleans who loves to play his horn against his mother’s objections, at 1 p.m. today at Octavia Books in New Orleans.

Cheré Coen is the author of “Haunted Lafayette, Louisiana” and “Exploring Cajun Country: A Historic Guide to Acadiana” and co-author of “Magic’s in the Bag: Creating Spellbinding Gris Gris Bags and Sachets.” She teaches writing at UL Lafayette’s Continuing Education. Write her at cherecoen@gmail.com.
Posted by Laura Roach Dragon at 9:53 PM