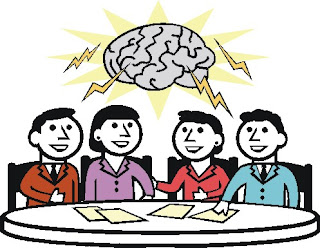 The Critique Group is one of the most powerful things a writer can utilize to hone his/her skills. They can be hard to find in your area, but there are also several online groups. Since I belong to a writers group in New Orleans, I don't know much about the online ones. Fortunately there are people online who do.
Online Writers Groups Review

Critique Groups aren't for everyone. You have to be prepared to be critiqued, for one thing. If you're anything like me, you think everything you write is solid gold and people who have a less than 14 carat opinion of me just don't get it. I have to wrestle with that at every meeting. If you're only going to hear applause by the people at the group, skip it. That's not the point of a critique group. That doesn't mean that you have to agree with every critique. Take what you like and leave the rest. I've seen some people whose writing skills have improved immensely because of the advice they've been given. Including me.

There's an interesting legend I heard but can't find online and therefore can't confirm. Anne Rice went to a critique group and when it was her turn for her chapter to be critiqued, she was told by a group member: "It's an interesting story, but I really don't think you can build an entire novel around a vampire." She never went back. If anyone out there can confirm this story, please let me know. I think it's priceless.

I find critique groups so helpful that I belong to two. Realms of Fiction which is a weekly line by line critique group, and SCBWI. SCBWI meets monthly and will be addressed in the following post.
Posted by Laura Roach Dragon at 9:14 PM